“You desire to know the art of living my friend?
It is contained in one phrase: make use of suffering.”
~ Henri Frederic Amiel

For over 30 years, I’ve had the honor and privilege of running a TV camera next to a big league dugout. It’s been my passion, my pride, my art, and my craft. And, I’ve learned from every one of my colleagues, in uniform and not, that anything is possible when we come together as a team. The challenges we face as individuals – not just from our opponents, but from our own internal doubts and fears – become surmountable when we know we are not alone.

These lessons came home to me in November, 2010, when I was diagnosed with Stage IV throat cancer. I got the news just 24 hours after the San Francisco Giants, the team I’ve worked closely with for 30 seasons, held a parade celebrating their World Series championship. In one day, my world turned from glowing color to flat black and white.

I was facing a deadly disease, under a paralyzing shadow cast by fear. I dreaded the agonizing chemo and radiation treatments. I feared losing the physical strength I had taken for granted. I worried about my ability to work and care for my loved ones. At one of my lowest points, I made a promise to God that if I were to survive, I would make a difference in the lives of people fighting cancer. The more time I spent in the cancer clinic – feeling my own fear, and that of other patients whose lives hung in the balance – my new teammates – the more I understood the contribution I could make.

If we could support each other to overcome fear and keep hope alive, we would increase our chances of winning against all odds. Inspired by the great teams and true champions I’ve come to know over the last 30 years, I created a Foundation with a mission to nurture hope and healing in people affected by cancer and, most importantly, to let them know they are not alone.

In tribute to the Giants’ 2010 team that battled through constant adversity to achieve the sweetest of victories, the Foundation was originally called The David Benzer Torture Cancer Foundation. As the organization grew, and our mission and goals developed, we realized that our name did not truly convey our purpose. In 2015, we became The David Benzer Strike Out Fear Foundation – because our aim is not simply to beat back the disease, but to address the fear and doubt that immobilize patients, holding them back from facing cancer with a positive, empowered attitude. 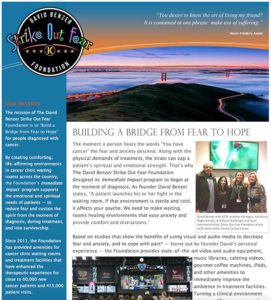