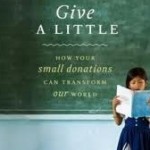 “With open hearts and open hands, we gave what we could, and a little became a lot.”

In preparing our fundraising plans for 2013 and beyond, we ran across this inspirational book Give a Little, How Your Small Donations Can Transform Our World by Wendy Smith. She provides numerous examples of how small donations have big impact.Two examples of note:

1) Dimes Destroy Polio. Throughout the first half of the twentieth century, polio was one of the most feared diseases in the developed world. At its worst, the disease caused paralysis and use of the dreaded iron long to force air into and out of the lungs. In the US alone there were tens of thousands of infections each year with a peak of 57,628 cases in 1952- more than 21,000 of them resulting in paralysis. In 1938, President Franklin D. Roosevelt, a polio victim himself, established the National Foundation for Infantile Paralysis. Its first campaign, called the “March of Dimes,” simply requested that people donate a dime to combat polio. Soon, the White House was awash with dimes and was forced to hire extra clerks to help manage the waves of mail. The campaign raised a total of $1.8 million the first year, of which $238,000 was collected in dimes which helped fund research by Dr. Jonas Salk, who was able to produce an effective vaccine that reduced the number of infections from over 20,000 each year in the 1950s to approximately 3,000 in 1960. By 1979, the disease was eradicated in the United States. An ocean of dimes had eliminated one of the century’s worst nightmares.

2) 30 Days Can Save a Life An oncology nurse and nutritionist traveled to Mandera, Kenya in 2005, to work at a feeding center. As she stated “I’d been a nurse at Sloan-Kettering Hospital taking care of patients with cancer. I thought I was ready to go and work in Kenya. But nothing could have prepared me for seeing this girl so close to death.” Her name was Habiba. Her mother and sister had taken turns carrying Habiba and her newborn sister as they walked three days from their remote village– a village with no clean water and there was no clean water along the way. The family of four had shared one bottle of water and one bottle of milk for their meals for three days. When Habiba arrived she was close to death. She could barely manage a blank stare. She was suffering from malnutrition, tuberculosis, malaria, and anemia.

Habiba was given a special formula with the right balance of nutrients for a malnourished body. It slowly wakes up the person’s stomach, liver, spleen, kidneys, and other body systems, and tells them it’s time to start working. Habiba had been deprived of food for so long that she no longer remembered what it was like to eat. At the end of one week, she was able to sit against the wall by herself and take a cup and drink from it. It was the first time Habiba’s mother had smiled since they came to the feeding center. But Habiba still had a long way to go. In the second week she began to eat a richer calorie diet and began playing with her baby sister and the center began to treat her tuberculosis. In the third week, she stood for the first time in a year. And, then one morning the nurse was overwhelmed when Habiba walked over to her and greeted her with a hug.

While Habiba was getting better, her mother was taught to weave mats which she could sell to pay for clothes and food for her family. 40 days after she arrived, a smiling, healthy Habiba walked out of the center. She was followed for nine months to treat her tuberculosis and to make sure that she was not malnourished. Water sanitation and hygiene programs were also started in her community. Today in every one of the world’s poorest countries, there are millions of Habibas. The numbers are staggering: 50 of the 192 member countries of the United Nations are labeled “least developed country” meaning that in these countries gross national income is less than $2.05 per day per person. When families are worried about food, the children are often not sent to school, their growth is stunted and they are more susceptible to a multitude of illnesses prevalent in the least developed world. Extreme poverty and hunger often beget violence.

When people have adequate nutrition, the children have the strength to go to school and fend off illness. When they receive even rudimentary sanitation and disease prevention items (water filters and mosquito nets) life improves. They are able to work and earn a living. If you believe you can only make a difference in world hunger if you are Bill Gates or Warren Buffet, think again. The cost for the care Habiba received at an Action Against Hunger Therapeutic Feeding Center was $50. And, the impact of that $50 ripples throughout the community, the country and to the world. The impact of giving just $50 lasts for eternity. A small donation will make an impact. Believe it. You can make an immediate difference in one life that over time touches many, many lives.